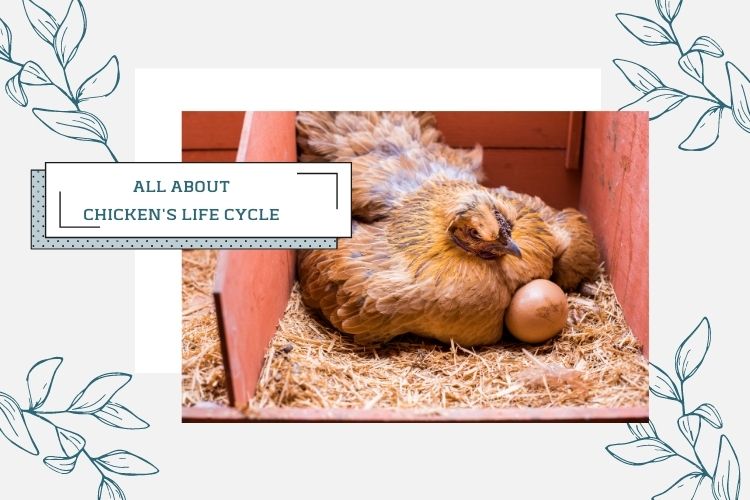 First there was a hen, and then she laid an egg. Or was the egg first?

While it's an interesting question, we can leave it for now and see what was in-between these stages in a chicken life cycle.

Chickens go through five main stages during their life cycle. A chicken starts as an embryo in a fertilized egg and hatches as a baby chick.

Young, domesticated chicks grow to become pullets and cockerels (or roosters). Chickens typically mature 16 to 24 weeks after hatching. Knowing the differences between each stage is important when choosing and caring for chickens:

Let’s have a closer look at each life stage of the chicken, from embryo to an adult hen or rooster.

The embryo stage is the first stage of the chicken’s life and begins inside an egg in a mother hen. The life cycle of a chicken egg lasts about 21 days as the embryo gradually develops into a hatchling.

The birth of a new chicken requires the fertilization of an egg. After a rooster and a hen mate, the sperm travels to the infundibulum, which is in the hen’s reproductive tract. If the sperm implants itself in the egg, an embryo begins to develop.

The development of the germinal disc starts on the first day of fertilization. The tiny germ develops tissue and gains blood circulation on the second day. By the third day, the embryo has a heartbeat and visible blood vessels.

The beak begins to form on the sixth day of embryo development. Feathers, teeth, and claws develop during the second week. In the third week, the embryo begins consuming the egg white inside the egg for sustenance.

A hatchling is a newly hatched baby chick. This stage lasts just a few days.

When the hatchling emerges from its shell, its downy feathers are wet and clinging to the body. The hatchling opens its eyes within the first few minutes and starts moving around.

Hatchling may wobble a little bit at first but can typically walk around relatively easily during the first few hours. The wet feathers dry quickly and become quite fluffy.

At this point, the hatchling should be placed in a brooder. A brooder is an enclosed area heated by an infrared lamp. New chickens typically stay in the brooder for up to six weeks.

A chick is a chicken that is still young, which can cover the period from hatching to adulthood. Baby chicks start developing their true feathers at about five days old. By the end of its first month of life, the chick should have its first true coat of feathers.

Pullets and cockerels are young, domesticated hens and roosters. People often refer to chickens in this stage as teenagers.

A pullet is a female chicken while a cockerel is a male. Pullets and cockerels are under the age of one year but already have the features of an adult chicken. You can typically visually distinguish male from female chickens at about five to seven weeks of age.

Cockerels will begin to crow, which is a distinct sign that you have a male teenage chicken. Cockerels also develop larger combs and wattles while pullets develop longer tail feathers.

The comb is the fleshy growth on top of the chicken’s head. The wattle is the growth that appears below the chin. Female chickens grow combs and wattles as well, but they are not as noticeable.

At about six weeks of age, as the chicks transition to pullets and cockerels, they are gradually moved to the coop. A common method involves placing the brooder inside the coop. The young chickens can access the brooder as they adapt to their new living conditions.

Pullets and cockerels are also separated before they reach sexual maturity. The females are placed in a coop with other females or a flock of hens and a single rooster. If a cockerel is not chosen for breeding, it is typically used for meat.

Watch these chickens grow day by day from hatching to being 3-months old:

Hens typically start laying eggs at around 18 weeks of age. Cockerels become sexually mature roosters at about four to five months of age.

When keeping backyard chickens, many chicken owners choose to keep only hens or hens and a single rooster. Hens do not need a rooster to lay eggs, but a rooster is needed to fertilize the eggs and produce new baby chicks.

Keeping multiple roosters creates more challenges, as male chickens are territorial and aggressive with each other.

Depending on the breed, you hen or rooster can be concidered old as early as at 2 years old and as late as 8 years old.

If you want to learn more, check out our articles on chicken lifespan. You'll find not only general information, but also useful tips on how to help your beloved chick live linger. 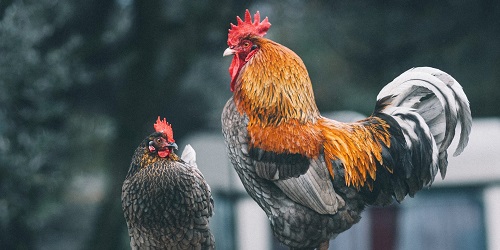