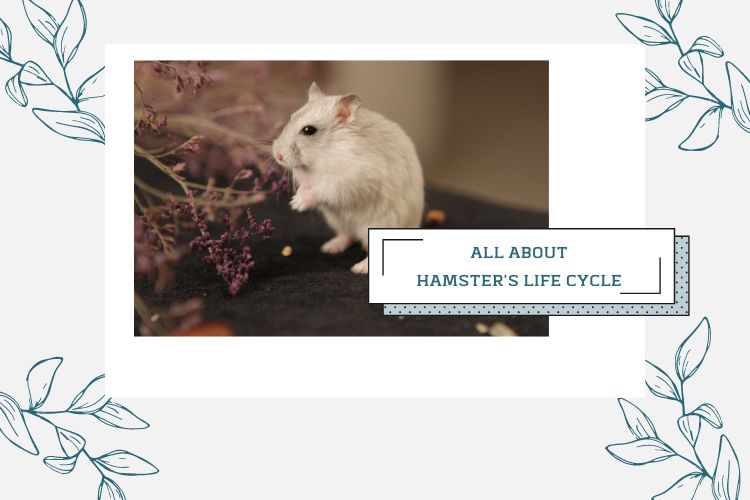 Photo by Doina Gavrilov on Unsplash

Hamsters are popular pets, and for a good reason – they are adorable and don't require much space even if you live in a small flat. As a pet owner, you should understand the hamster life cycle so you can provide the best possible care for your furry friend.

This article will discuss everything you need to know about the hamster's life cycle, from birth to death. Read on to learn the details!

The stages of a hamster's life cycle

With hamsters, you can expect a typical life cycle from birth to death. You can break down this cycle into several stages:

To better understand the life and health of your hamster, let's take a closer look at each. 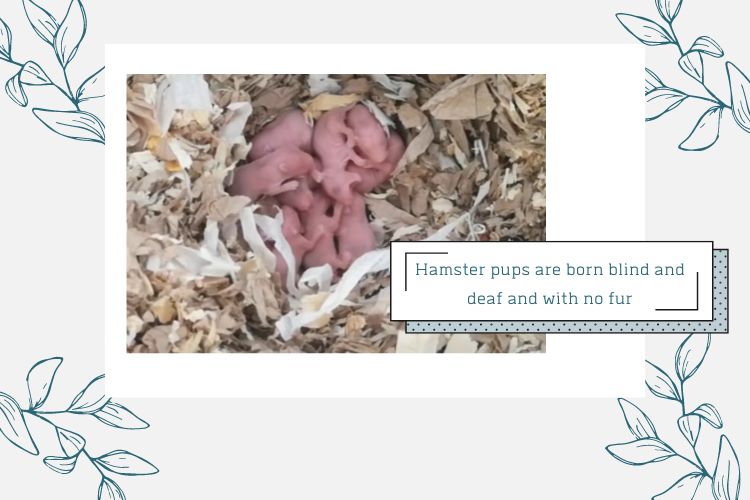 Newborn hamsters are blind and deaf, and they rely on their mother for food and protection. They begin to grow fur at around 10 days old, and they start to eat solid food at about three weeks old.

Hamster pups are almost as helpless as human babies. They can't see or hear right away, so it's vital to ensure they stay close to the mother and far from harm's reach. Although their ears don't open right away, it's still important to avoid making loud or sudden noises near or around them. This might stress the mother and cause the newborn hamsters to panic. 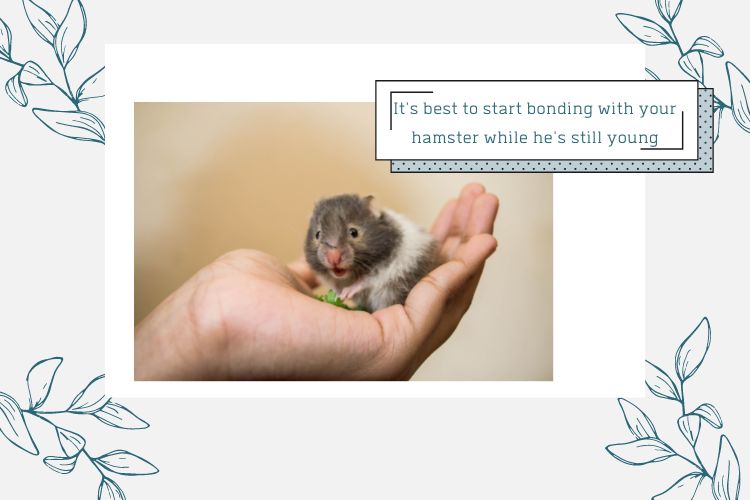 Photo by Finn-E on Unsplash

Once hamster pups can see and hear (after about two weeks from birth), they start exploring their environment. They will wander around the cage and venture outside of it while learning how to climb and crawl.

Bonding between you and the hamster will begin at this stage. You can start teaching it to do tricks such as standing, jumping, and running in circles. Of course, food is the medium. It will take some time and patience, but hamsters are intelligent enough – even during infancy – to learn a thing or two.

Hamsters develop into adolescents between weeks two and four. They won't necessarily act out as human adolescents, but they become even more adventurous and curious. Additionally, they start to lose their baby fur and grow in their adult fur. Hamsters' teeth will have also begun to grow after about 10 days.

Hamster pups can eat solid food after about 10 days and will naturally wean from their mother entirely by four weeks. 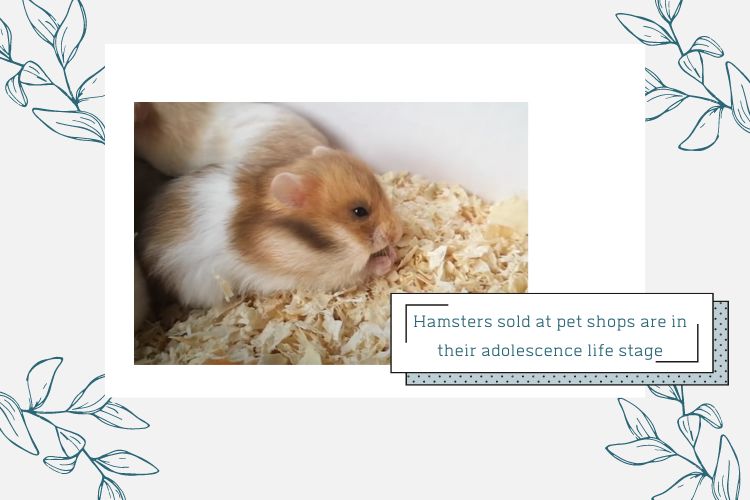 This is the stage when you can actually buy a hamster. The age of hamsters sold at pet shops vary, and you can buy a hamster as young as 4-5 weeks old. The average age of hamsters when they are sold is 9 weeks, but depending on how long they stayed in the shop, you might get a 2-3 months old hamster.

It's important to start handling the hamster from an early age (once they become voluntarily mobile) to get them acclimated to humans and other pets if you have any.

By the time a hamster reaches the age of 4 to 6 weeks old, they have become sexually mature. At this stage, hamsters appear fully proportional but continue to grow before reaching their full adult size.

Male hamsters typically mature faster than females, so you can expect them to reach sexual maturity after just a month of life. However, some females won't be ready for breeding until a little later. Female hamsters reach sexual maturity around the age of 9 weeks. Once sexually mature, it may be wise to keep males and females separated if you don't want them to mate.

The female hamster’s gestation period is very short compared to many other species of mammals. After just 18 to 22 days, you can expect to have a litter of 6 to 8 hamster pups.

Photo by Ellie Burgin from Pexels

At the age of 5-6 months hamsters reach adulthood and are fully grown. They will continue to explore their surroundings and may even venture outside the home cage for the first time (under supervision).

By now, your hamster should be very friendly and sociable. It will display acceptance toward human contact and activity around it.

Hamster's teeth continue to grow throughout its adult life (up until it dies). So you should keep something hard in the cage – a chew toy – that keeps its teeth filed down and healthy, or simply a constant supply of food. A hamster needs to continue chewing. Otherwise, its incisors become dangerously long.

Adult hamsters weigh approximately 4.5 ounces on average, but weight and size will vary depending on the breed. Some pet owners prefer keeping dwarf species of hamsters because they don't need a large enclosure or take up as much space within one (compared with Syrian Hamsters).

Adult hamsters can live up to three years old if properly cared for. Some may even live longer than that, depending on the species and the living conditions you create for them!

Eventually, hamsters will reach the end of their life cycle and die. Most hamsters have a short life span of 2-3 years, and a hamster is considered really old as it's getting closer to the age of 2 years. Nevertheless, you might notice the signs of your hamster getting old earlier than that. These may include:

If your hamster starts to exhibit any of these signs, it's time to have it checked by a veterinarian.

If you adopt an older hamster taming him is still possible. The techniques to create a bond will be the same as with the young ones: get the adult hamster used to your scent, let him explore the surroundings, take care of his diet and spend enough time with him. The only difference beween taming a young and an old hamster is that the latter requires more efforts, consistency and patience.

A hamster's average life span is around two or three years when kept as a pet in captivity, but some can live up to three years with good care. Hamsters are prey animals, however, so they often hide illnesses until it's too late. Therefore, veterinarians suggest annual checkups for all pets regardless of their health status. 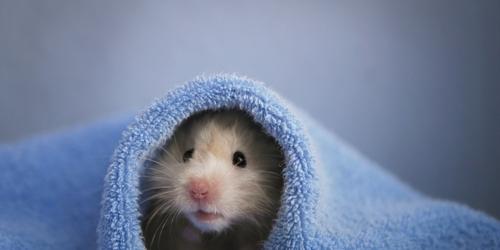 How to Tell a Hamster’s Age 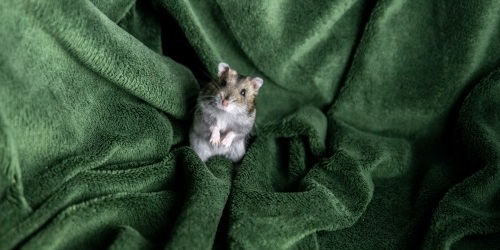